My Grateful Journey
On My Own, But Never Alone

Gone, but not forgotten. #RIPMyStache

If you know me or had a chance to meet me over  the past three almost four years the one thing you probably would have said about me is nice mustache.  I heard this at least once a week from complete strangers on the street.  Having a great mustache became my thing. 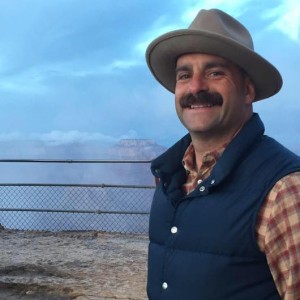 My mustache was an ice breaker in any situation and was helpful in closing deals.  I would get good seating at restaurants or special attention at an event.  Was this partialy because of my mustache?  I live in Venice Beach, one of the coolest beach towns in the world.  Venice is known for being a haven for trendsetters and hipsters.  Having a mustache gave me a new sense of belonging.  It was the missing ingredient I’d been lacking personally and professionally.  I met my fiancé after I’d grown my stache for Movember 2012. It was the perfect accessory to go along with the travel brand I launched #TravelWithMeaning.   I loved my mustache.

Sadly, my mustache was taken from me February 26, 2016 without my consent. 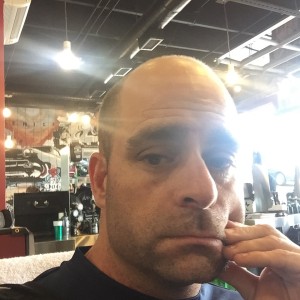 My mustache was shaved off by a   barber at Floyd’s Barbershop in Venice Beach. This may sound silly to some, but this has been upsetting and devastating to me. I’m sure you’re saying “how could this  happen” and “who cares? it will grow back.”  I’ll explain all of this to you, but what I want to share is  I did not want my mustache shaved off.  My mustache represented my brand.  This is my body and my choice.

Several of my Mo friends questioned why I would go Floyd’s.  I actually like Floyd’s, it’s less than a block from my house and cost effective.  However, I have a few issues with Floyd’s besides the fact they shaved off my mustache.  I’ve been a customer of Floyd’s for over eight months and I’ve  visited the location almost every two weeks for my mustache trim.  I’ve seen a few different barbers over the course of the eight months and all have done a solid job on my mustache.  The problem isn’t the barber, minus the one who shaved off my stache.  The problem is the lack of customer service.  Over the course of the eight months that I visited this location I felt like I was a new customer every time. I never felt appreciated or valued as a customer. 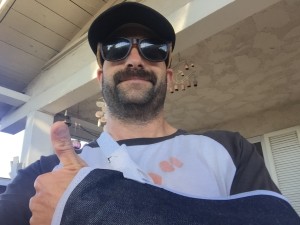 So how did I let this happen?  I was recovering from shoulder surgery and had not shaved or showered in almost a week.  I was beginning to look a little shaggy.  My fiancé suggested I  treat myself to a trim at Floyd’s.   I had been feeling like crap from the surgery and the thought of having a barber use hot shaving cream to clean up my face sounded relaxing and just what I needed.  I called just after 9am the morning of Friday 26 to schedule an  appointment for that afternoon.  I asked if Jason would be in that day and was told he was still out of town.  I decided to go with another barber who had trimmed my stache two weeks earlier.   I walked into Floyd’s with my arm in a sling just before 4pm.  Of course they were busy.  They’re always busy, which is a good thing for them, bad thing for customer service.  I checked in with the receptionist, who after a few moments found my name and asked me to have a seat.  While waiting I saw Jason, the barber I had wanted to see. He was working, but was booked up with clients.  He apologized that I had  been given the wrong information. He told me to go online next time to book the appointment in advance.  Good to know. After waiting for fifteen minutes, I was beginning  to get a little annoyed. My shoulder was uncomfortable and I felt that Floyd’s screwed up by not assigning me  the barber I had wanted, even telling me that he was out of town. I saw the barber I was waiting for talking with the recptionist and heard her ask who was next.  I could see the receptionist fumbling around looking at the waiting list so I walked over the desk and said I should be next.  The barber smiled and said nice to see you.  As we walked back to her station I asked my barber why there was always drama with reception.  She laughed and apologized as the last time she trimmed me the same situation happened. The barber  asked what happened with my shoulder.  After sharing my shoulder surgery story I told her I had been unable to lift my l arm and to shave properly.  I told her my beard and face were looking a little shaggy and I needed to be cleaned up.  I NEVER said I wanted a full face shave, nor shave my mustache.  I take responsibility on my end for not being more specific with her. I trusted the barber.  I do believe it is the responsibility of the barber to ask the client what services they will be having and make sure there is an understanding.  Clearly there was not.

The barber started to trim the side of my face with the electric razor.  I asked her if she was cleaning it up before using hot shaving cream, which she said she was.  I settled into the chair and dozed off for a minute.  I could feel the razor going around the top of my mustache and asked her how much of my stache was being trimmed?  The razor stopped.  I sat up to see in my horror that  my beautiful mustache had been shaved off.   I was in shock. I said ” you cut off my fucking mustache”,  The barber was speechless.  She said “I thought you wanted a full shave.” I never said I wanted a full shave.  I asked the barber to please walk away and give me a few moments alone.  I did not want to be rude, mean or a dick to the barber, not to mention she had to still finish my shave. I took a few pictures, texted my fiancé and had a weird moment looking in the mirror at a face I had not seen in  a while.

I was assured I would not have to pay for the service and was pushed out the door when we finished.  I did not speak to a manager or anyone regarding what had happened.  I did not pay or leave a tip.  It felt very shady.  I couldn’t comprehend what really happened and was in disbelief that my mustache was shaved off.  It didn’t really hit me until later that night when going out to dinner my fiancé  kept saying that I looked so different, cute and attractive, but  different. 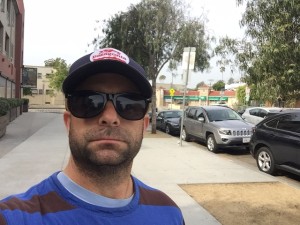 Six days after the shave, the awkward stubble phase.

I appreciate everyone who has said I look great without my mustache and it will grow back.  Thank you.  I do understand it will grow back and it’s always nice to be told that you’re handsome, however this was not my choice.  My mustache is growing back and is currently in an awkward beard phase.  I’m grateful not to have an issue growing facial hair.  Though, there is upkeep involved and it did take me close to a year to get the first stache shaped just right.

This brings me to asking for your support by doing one of two things.  If you’re a Mo Bro, or have love for the Mo Bro’s here’s my request.

1. Watch and share the tribute video I made to my mustache using #MustacheJustice . My Mustache Tribute. Gone, But Not Forgotten

2. If you’re a Mo Bro or have a Mo in your life please take a picture of your stache and share it on social media with #MustacheJustice

What is my intention for this campaign you may be asking?

1 – I do not want to see this happen to another Mo Bro. Seriously, always make sure you check with the barber so that everyone is clear the stache will not be harmed if you’re getting a shave.

2 – As consumers we should be a stand for good customer service and not be ok with below average service.

3 – This is my body and my choice to shave or not shave my mustache. I want Floyd’s to be held accountable.

I have to give a big thank you to American Mustache Institute for sharing my story click here  and Up & Adam in the morning Q104.5 for having me as a guest to share the #MustacheJustice story.  To hear my radio interview click here.

I went around LA and asked some of my fellow Mo Bro’s how they would feel if they had their mustache shaved off without permission.  Here’s what they said click here

Thank you for letting me share my story.  If you have anything you want to share with me or tell me how ridiculous this is I can be reached at Mike@Schibel.com